Fuel prices are high… and they’re not going to drop drastically any time soon, or ever. As fuel prices continue to rise, customers are more interested in fuel-efficient compacts and hybrids to find relief from the pump.

A recent survey of car shoppers on kbb.com found that 51% of respondents are now considering a smaller, more fuel-efficient vehicle. “GM’s strategic investments in four-cylinder and turbocharged engines, advanced transmissions and vehicle electrification have been very well timed,” said Mark Reuss, president of GM North America. “Three years ago, about 16 percent of the vehicles GM sold achieved at least 30 mpg on the highway. Today, that number is about 40 percent, and we have more new fuel-economy leaders on the way…”

So if you’re looking for an environmentally responsible car that fits your budget and your lifestyle, visit LaSorsa Chevrolet, we have plenty of options for you.

Let’s say you’re going to buy them their own car to teach them about responsibility. Vroomgirls.com recently compiled a list of ‘6 Best New Cars For Your Teenage‘.

Here’s what they had to say about the Chevrolet Sonic:

“Safety is the first concern of most parents who want to put their teen on wheels, and the Chevrolet Sonic is, so far, the smallest and least- 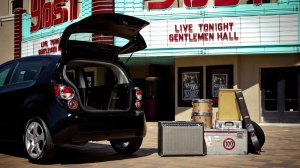 expensive car to earn both a perfect five stars in the Government’s tough new crash tests and the coveted Top Safety Pick Award from the Insurance Institute for Highway Safety (IIHS). A strong body shell and a whopping ten airbags (most cars have only six) are key to the Chevy Sonic’s defenses. But we also like the Sonic’s simple, easy-to-use control layout, which promotes distraction-free driving and helps your teen driver avoid an accident in the first place. Teens will like the American-built Chevrolet Sonic’s modern, attractive styling, and whoever is paying the bills will appreciate the low price, with the air-conditioned Sonic LS base model starting well under $15,000.”

We have Chevrolet Sonic’s on the lot, so stop by the dealership – we’ve got you covered!

Error: Twitter did not respond. Please wait a few minutes and refresh this page.